Ben Tuge is an emerging sculptor of exceptional talent. He is a versatile sculptor and master carver of thought provoking woodcarving, a satirical landscape and portrait painter, a spiritual scribe and visionary thinker.

As a sculptor who specializes in human figures, Tuge’s fine abstract and contemporary works are created with various types of woods, mix media and collage on it. Collage on wooden carving is a process he recently created as a new form of art where he patiently cut random pieces of paper from magazines and newspaper and stick on the carved wood and all forms of found objects that he finds fit to be part of the sculpture.

Ben has held successful exhibitions in art galleries such as Bulawayo Art Gallery in Zimbabwe from 1997-2001.  With the economic and political situations in that country, he moved to The Republic of South Africa in 2004 where he exhibited at The Everard Read Gallery from 2006-2009 and at the Art investments Gallery from 2012-2013.

From 2011 to date, he has been represented by the Art Eye Gallery in Johannesburg where he has seen almost every sculpture of his cast into edition of bronzes.  His art appeals to several individual collectors, local and abroad. 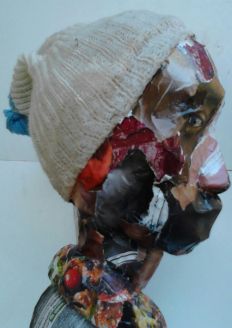