Vincent Osemwegie was born in 1977 in Nigeria, and being creative since childhood, went on to study art at the University of Benin.

Since 2009, he calls South Africa home. The year 2013 marked a turn in his artistic career when his technique evolved “from realistic to expressive”, creating images with drippings of paints with little or no brush contact to the canvas. One notable work portrays Kitty Phetla, known for her performance of “The Dying Swan” at the Royal Carre Theater at the Faranani concert for Nelson Mandela in Amsterdam in 2002. Her passion, dedication, focus and hard work towards her career, inspired Vincent’s major new works, thus portraying ballet dancers in their “moments”.

Vincent has participated in a number of group exhibitions in Johannesburg, including one organized by Bronwyn Lace at the bag factory in 2009. One of his most recent group shows was at the Lizamore & Associates in 2015/2016. His first solo Exhibition was held at the LAE at Maboneng in 2014.

His desire to work with media that are yet to be explored in the art has recently landed him to paint on Perspex, positively impacting his artistic career.

Vincent spends most of his time painting at his studio located in a quiet and serene part of Johannesburg. 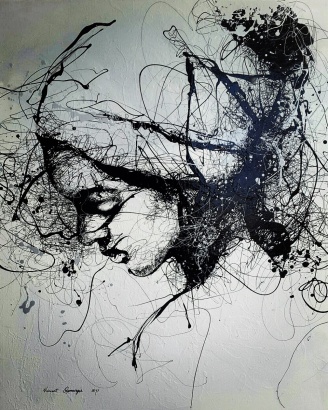